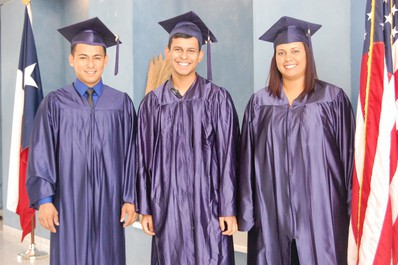 The three graduates pictured are among the first AAMA Adelante graduates under the new GED requirements. The students are trailblazers, our hope, and our proof that yes, you can do this. A GED is not the end, it can be your ticket to the next step of your future.

Mario works as a PNC operator in the oil industry, but his dream is to be a PNC programmer. He is continuing his studies by taking ESL classes at AAMA and hopes to enroll at Houston Community College.

Erick had been out of school for four years when he enrolled at AAMA Adelante. He completed his GED in June and is starting classes at University of Houston, majoring in Psychology. He hopes one day to become an attorney.

Paula obtained her GED by attending morning classes and working in the afternoon as an accounting assistant. She plans to enroll at HCC to further her career as an accountant.