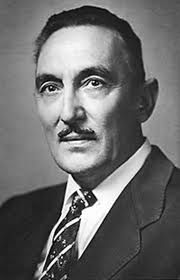 George Isidore Sánchez (1906-1972), was a pioneer in the field of education as well as a civil rights activist.

A native of Albuquerque, New Mexico, he served on the faculty of the University of New Mexico and held several positions at the University of Texas from 1940 until his death, including chairman of the Department of History and Philosophy of Education from 1951-1959. Dr. Sánchez also served as president of the League of United Latin American Citizens (LULAC) from 1941-1942.

Throughout his career, Sánchez fought for equal educational opportunities for Mexican American students and opposed the use of racially-biased standardized tests and segregation based on nonproficiency in English. A noted author, Sánchez’s best-known work is Forgotten People: A Study of New Mexicans published in 1940.

AAMA honored the legacy of Dr. George I. Sánchez for improving educational opportunities for Latinos by naming its charter school in his memory.